Bhutan, high in the Himalayas, a Shangri-La and the land of the Thunder Dragon and a million butterflies. And the land that exiled almost one sixth of its population between 1990 and 1992 through violent ethnic cleansing to its neighboring countries India and Nepal.

Most people know Bhutan as the beautiful country in the Himalayas connected with the phrase ‘Gross National Happiness’. But Bhutan has another side. It is also the country that is structurally abusing the human and civil rights of a large portion of it’s people. For more than 20 years now, over a hundred thousand Bhutanese people live in exile in large camps in the southeast of the neighboring country Nepal. They have become stateless after their citizinship was taken away by the Bhutanese king and government. This refugee situation is largely unknown in the Netherlands, just like it is unknown in most other western countries.

This was the reason for the Empowerment Foundation to start a human rights and art project embrace with the purpose of shining a light on the situation of the Bhutanese exiles, thus empowering them by recognition of their existence as a people.

The project focuses on the almost unknown story of the exiles from Bhutan and the resettlement of them by the United Nations to a number of western countries. This resettlement program is according to the UNHCR (United Nations Commision fot Refugees) the largest third country resettlement program ever. Since 2008 many of the refugees are being resettled to a number of countries in the West, including the United States, Canada, Australia, New Zealand and a couple of Europen countries. And to the Netherlands, most provinces of the country now have limited numbers of Bhutanese living there trying to restart their lives.

Within the Empowerment Foundation this project has grown to the largest project we are executing and maintaining in 2010 to 2013. 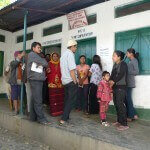 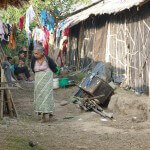 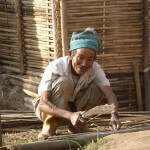 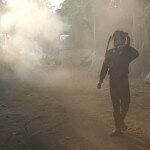 During this period the Empowerment Foundation was working on two books as well as photo exhibitions with the aim to uncover the situation of the Bhutanese people who were exiled from their country through ethnic cleansing in the early ninetees of the past century. They have been living in refugee camps in the neighboring country Nepal after India had refused them a safe place.

The books and exhibitions are in combination and seperately telling the story of these people and as such empowering them by having their history documented and published. this recognition for the exiles from Bhutan is of great importance because the UNHCR’s third country resettlement project will erase their camp life and history. Most of the exiles will start a new life (or have already done so) in the United States, Canada, Australia, New Zealand, Norway, Denmark, the Netherlands or the United Kingdom. They will in the process within generations loose their culture and possibly even their religion and history. As most refugees, asylum seekers and exiles living in diaspora usually do.

Our unique project shows their life, the conditions they suffer and the challenges they meet.

Both books (UNFORGOTTEN and Headwind, Laxmi’s Story) have been published in September 2012.

While filming the filmmakers and photographers took thousands of photos in and around the camps. The best ones are exhibited in a number of exhibitions in 2011 until 2013. In 2011 the first exhibition in The Hague was visited by almost 800 viewers in its first few days after opening. In 2012 a major exhibition was held at the Domchurch in Utrecht with an visiting number of over 25,000 visitors. A third exhibition was held at the Sint Bavokerk in Haarlem until September 2013.

In september 2012 the photobook UNFORGOTTEN by Eveline and Alice Anna and the novel Headwind, Laxmi’s Story written by Alice Anna were published. Both books can be ordered at the Empowerment Foundation Webshop.

The Empowerment Foundation is responsible for this projects financial management, fund raising, promotion and practical support. WoordenStorm Publishers publishes the books in cooperation with Boekenbent.